Staff member
House Speaker Nancy Pelosi (D-CA) on Friday, while speaking on the Democrat-led police reform bill, bungled George Floyd’s name, telling reporters that Democrats are “very proud” that their measure carries “George Kirby’s” name.
“And I’m very proud, before the Judiciary Committee — that before he testified he said to me, ‘Madam Speaker, do you think that I can tell George’s daughter that his name will be always remembered because you’ll name the bill for him,’” Pelosi said during Friday’s press conference. “And I said, ‘Well I’ll recommend that to the Judiciary Committee and to the — to the Congressional Black Caucus who have shaped the bill, but I only will do that if you tell me that this legislation is worthy of George Kirby’s name,’” she said, uttering “Kirby” instead of “Floyd.” “And so we’re very proud, we’re very proud to carry that,” she continued.

These Liberals just can't seem to get names correct. Earlier this week, Senate Minority Leader Chuck Schumer referred to “Floyd Taylor” — accidentally putting together the names of Floyd and Breonna Taylor, who was killed by police earlier this year in Kentucky. 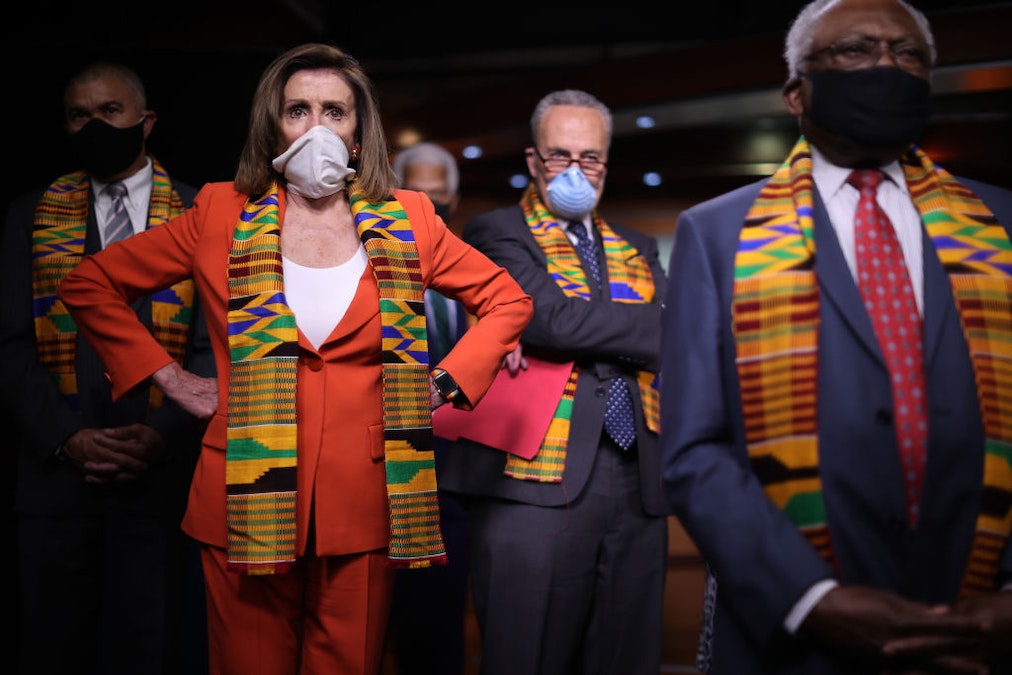 The leaders of the Democratic Party in Washington, Senate Minority Leader Chuck Schumer and House Speaker Nancy Pelosi, are so dedicated to seeking justice for Floyd Taylor —wait — George Taylor —George Kirby — wait — just whom are they seeking justice for? According to Schumer, it’s Floyd...

www.pacificpundit.com
Having hunted with dozens of detectors since 1972, and having been chosen by Minelab to Field Test many of their detectors developed over the past 15 years, I've come to the conclusion that maintaining success in the field is largely dependent on three things..... choice of site.......acquiring a proper skill set for the detector......and the functionality of the detector itself..... in that order. Research, practice and persistence. There are no substitutes.

Hahaha! All Liberal Democrats are a couple of bananas short of a bunch

It is just a show and they forgot their lines, they could care less about George Floyd. They got to keep this country down until they get their power back in November.
Worked and lived in the Huntington West Virginia area all my life, retired 2010
US Air Force Vietnam Veteran (68-69 & 70-71)
Started getting into metal detecting around 1975
R

Wasnt George Kirby a black comedian? Should I be laughing or should I just wait for Don Rickles to clear up any confusion???????
Retired deputy sheriff. The wife said I needed a hobby and it could not be a girlfriend. So far the Fisher F5 is the perfect girlfriend, light on her feet and lets me lead across the dance floor!
T

This is long, but I read the bill that passed in the house and am just shaking my head. Senate will squash it, I hope, they should. And then they should push back hard on the power grab attempt.
The bill is HR 7120
It stops short of federalizing the police force, but is a large step towards a federalized police force. Not a good thing.
It requires specific demographics of police in specific police departments. No consideration for hiring the best and brightest, only that specific demographics must be employed.

After saying don't profile it states “Proof that the routine or spontaneous investigatory activities of law enforcement agents in a jurisdiction have had a disparate impact on individuals with a particular characteristic described in section 302(6) shall constitute prima facie evidence of a violation of this part.” It is saying that if all the reported crime is in a neighborhood composed mostly of one demographic, and even if there is no profiling going on in the police response to the area, the police will be found in violation of the profiling part of the act because they are producing more arrests in this area than in other areas of the department’s jurisdiction. Essentially guilty, just for responding to calls. It is fact that police in cities receive more 911 calls from certain demographics. Are the police supposed to stop responding to calls after the quota for response for the neighborhood is hit so that they don’t run afoul of this bill? This puts citizens at risk.

In the mealy wording on what is covered as law enforcement entities, investigating illegal immigrants is also classed as illegal profiling activities. So it makes enforcement of immigration laws an unlawful profiling.

The bill greatly restricts and adds significant regulation (costs) to the transfer of military surplus equipment to civilian law enforcement agencies. In many jurisdictions, that means medical transport helicopters that are military surplus will no longer be available or supportable, since parts will not be available either. A few years back when I was on a beach trip to Fort Lauderdale, the local papers were running articles on how an Obama executive order restricting transfer of military surplus was going to ground their entire medivac helicopter units due to shut down of parts availability. Replacement of the medivac helicopters was a hundreds of millions of dollars proposition where as maintaining the fleet was a couple hundred of thousands, if they could get parts. President Trump reversed that order and saved the south east Florida counties hundreds of millions of dollars that they would have needed to replace the aircraft if they had run out of repair parts. I'm sure that is not unique to those counties. Now Pelosi and the democrats want to put that failed policy back in place in this bill.

On body cameras there is no exception to activation requirements that protect the officer should the camera get ripped from the officer’s possession. The officer would still be reported for wrongful termination of recording.

The bill disallows facial recognition technology. So does that mean it will also no longer allow a line up where a witness picks a criminal out from a group of people? That too is facial recognition, is not infallible, but is a valuable tool.

It is all about a power grab. When it is squashed in the Senate, Pelosi et al will scream that they must take the senate and presidency for justice. Justice is not what they want, it is power.
You must log in or register to reply here.
Share:
Facebook Reddit Pinterest Tumblr WhatsApp Email Link
Menu
Log in
Register
Top