This hunt was a while back, but I never got around to posting pictures. My partner and I were researching possible locations for a Fremont-era early war Yankee camp in the area and we had a pretty decent location pegged. We got boots on the ground and started sweeping the best looking terrain of the area. After a few hours, we were coming up nearly blank with a few shot pistol balls.

We move to the steeper, north sloping area and my friend hits on some mid-1900’s silver (half dollar and a dime if I recall). Our spirits perk up a bit, as we are both ok with coinshooting at this point. I get a 12-37 signal on my CTX and cut the plug, hoping to find an Indian cent or the elusive minie bullet. I see the white oxidized lead but notice that the bullet looks a little different. After brushing the dirt away, I had found a triangle-high-based .69 bullet that we call “French triangles.” I ran over to my partner and flopped it in his glove. Suddenly, silver coins were off the menu and we proceeded to hit the area low and slow. It wasn’t long until he had uncovered his first ever French triangle.

Now, up to this point, I have found five of the French triangles before and all of them were associated with early-war Yankee camps. The most I had ever found in one spot was 3. They are fairly rare bullet in Missouri. We were completely amazed to see so many of them get under our coils at this spot. The site also gave up .69 and .58 minies along with various pistol bullets.

We ended up with 35 French triangles between us. I found 10 in one hole alone (and a 10-count hole of .69 minies). We only found one button, a plain flat button. Based on the lack of other brass stuff or iron campsite items, my partner believes this was a picket spot. That means the main camp is still waiting out there somewhere for us to find. 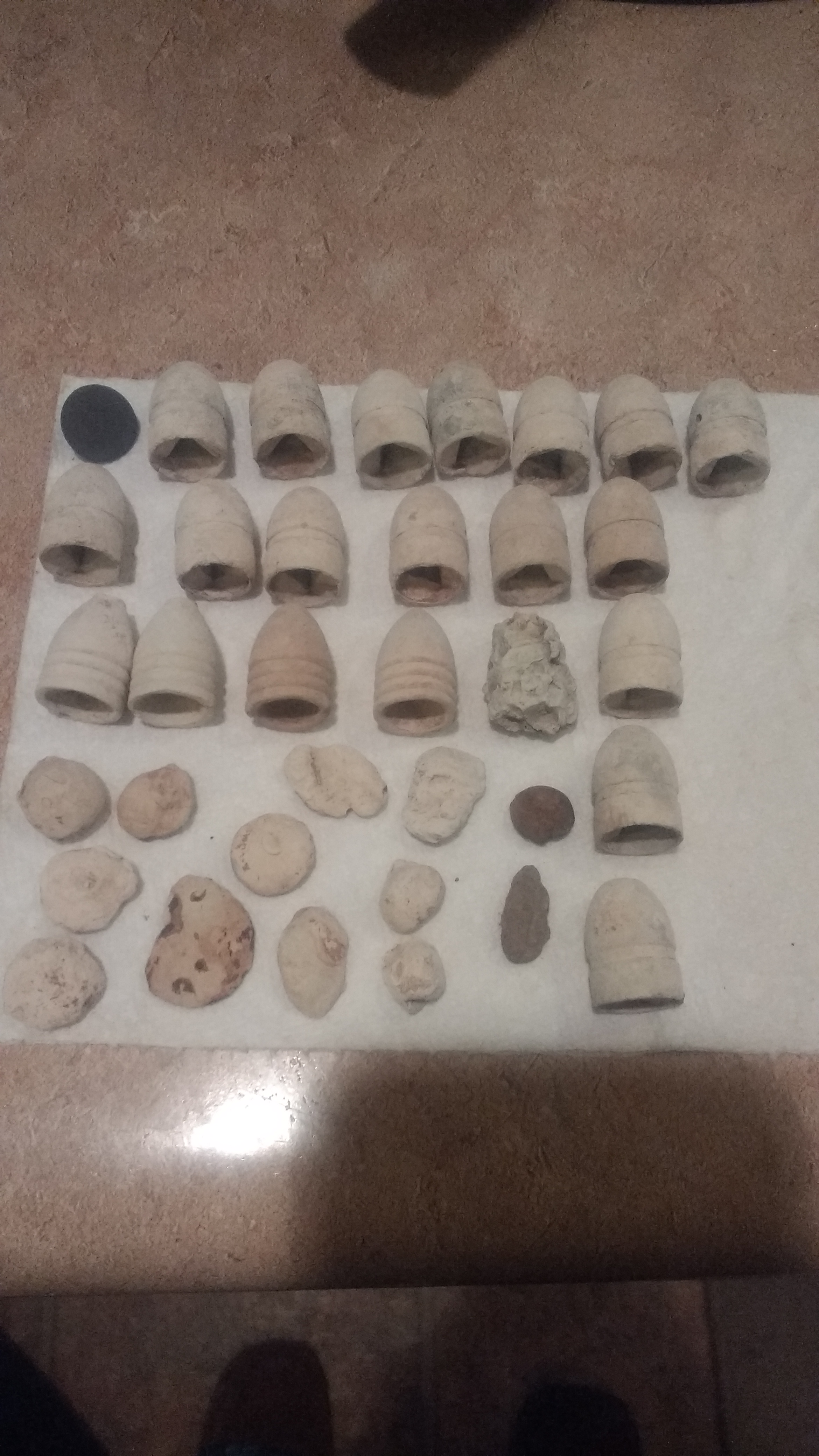 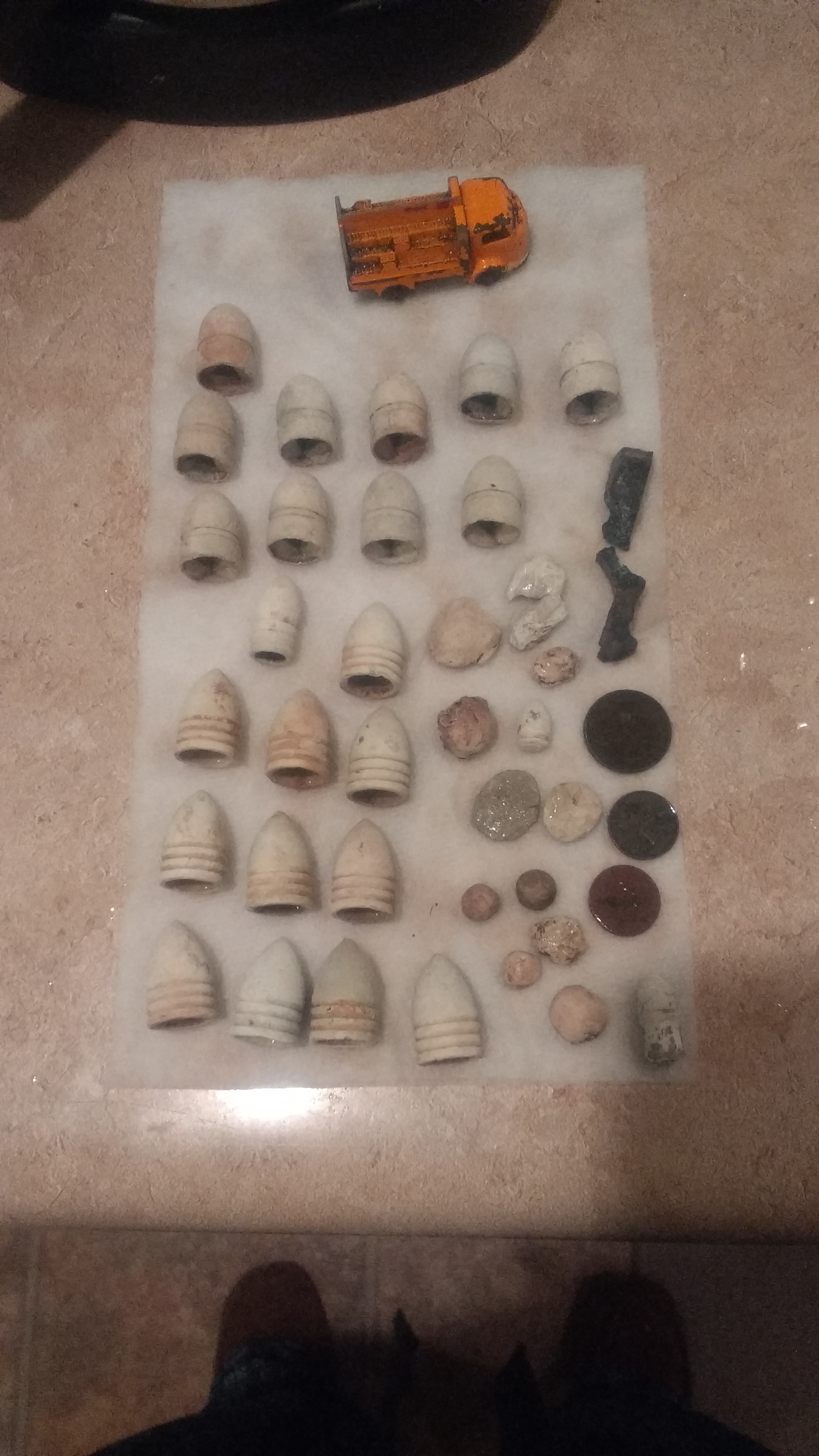 Like the song says: " You Are Ironman" Congrats to you and your Buddy on all the French Triangle bullets and all the other bullets and lead. That was a very good hunt. I don't believe I have ever dug the first triangular bullet. They are a cool piece of Saved History. Well Done.

Staff member
Great story, sounds like some of my adventures looking for a site. Sometimes you basically park on top of it and other times take several trips to nail it. I would say you guys nailed it with research and hunting!
HH Jeff

Thanks. I hear they find them out east. we find the high bass variety here in the Trans-Mississippi, and sporadically at that.
Bryan in Missouri
"MidMoTreasure" on Youtube
www.midmolawyer.com

Found several 54.cal triangle base in one of Bank's camps in Maryland.
The Original Buttondigger since 1969.
Still on the right side of the grass.

texkinzee said:
Found several 54.cal triangle base in one of Bank's camps in Maryland.
Click to expand...

Those are cool looking bullets but I do not believe I have the first. Have you got any pic's? Are you referring to one of Nathaniel Banks camps?

Confetrit said:
Those are cool looking bullets but I do not believe I have the first. Have you got any pic's? Are you referring to one of Nathaniel Banks camps?
Click to expand...

Yes. Found several of his early camps including the 5th Army Corps Camp near Rockville Md. in the 80's
The Original Buttondigger since 1969.
Still on the right side of the grass.

His are early war minnies confederate and union.
The Original Buttondigger since 1969.
Still on the right side of the grass.

texkinzee said:
His are early war minnies confederate and union.
Click to expand...

that is what is so cool about hunting in Virginia and Maryland. Y'all are able to find some early war stuff. Here in Georgia it is all late war artifacts, but I'll takem' when I can.
C