Good evening....I found this belt buckle in a box that had been in the family members closet for years. I’m assuming it’s new/reproduction but would love if someone could shed some light on what time period an ‘original’ would have been from. I tried doing some reverse image searches and was unable to find any belt buckles that matched this one. Thanks for your help! 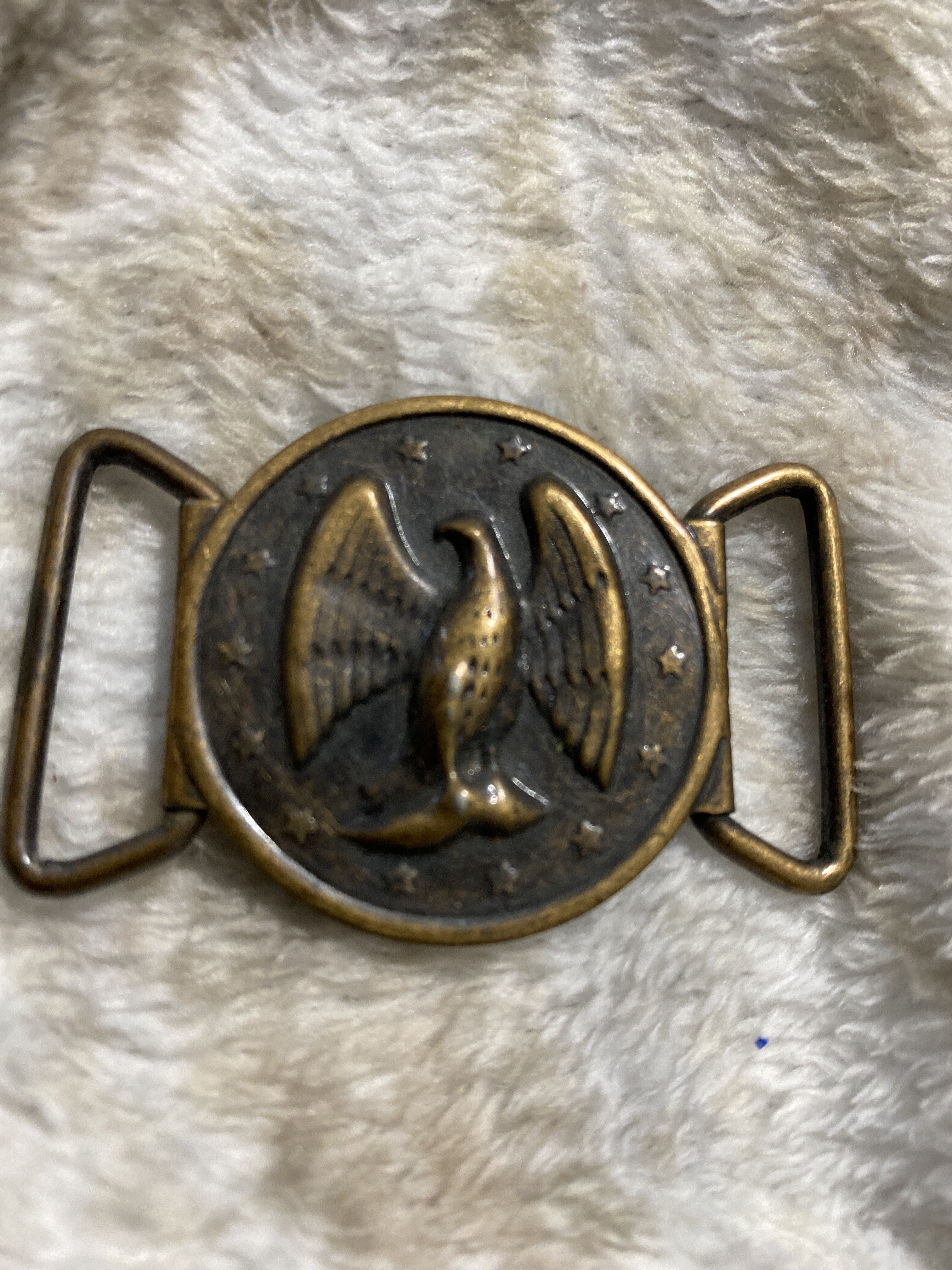 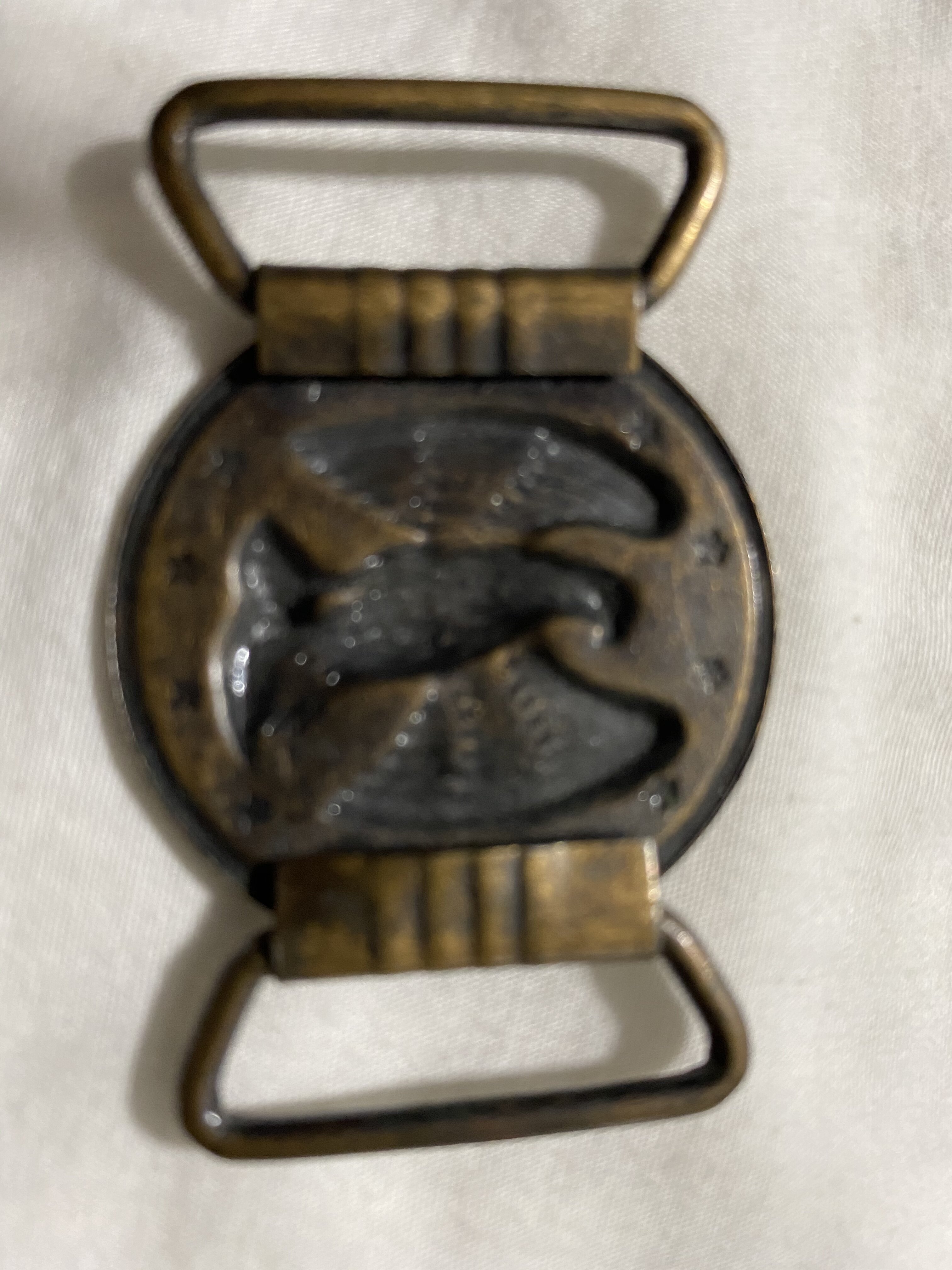 Nothing on military buckles type sites? No way to tell from photos if magnetic or any makers marks etc on it....
Retired deputy sheriff. The wife said I needed a hobby and it could not be a girlfriend. So far the Fisher F5 is the perfect girlfriend, light on her feet and lets me lead across the dance floor!

Looks like a lacquer finish on it ? Hard to tell from the pic..
D

Thanks for the replies - unfortunately, there are no makers marks. It is magnetic
M

Dapman04 said:
Thanks for the replies - unfortunately, there are no makers marks. It is magnetic
Click to expand...

Nice one any way! Hope you will be able to get the real info on it! Ma Betty

Hey Dapman, interesting belt plate, as you mentioned after an extensive search through a lot of resources, was not able to find a match.

That is an unusual number of stars for historical items, flags, coins, buttons, emblems and such... on most things you'll usually see 13 stars for the 13 original colonies, or even 13 for each of the confederate states on the Battle Flag of the Confederacy.

That said there are a few exceptions where you will find 14 stars and they tend to fall into 3 categories...

1. Arbitrary: There are a number of coins that show an eagle and 14 stars. In many cases the number of stars came down to a whim of the person making the die plates with some coins of the same year having 13 stars, others 14. 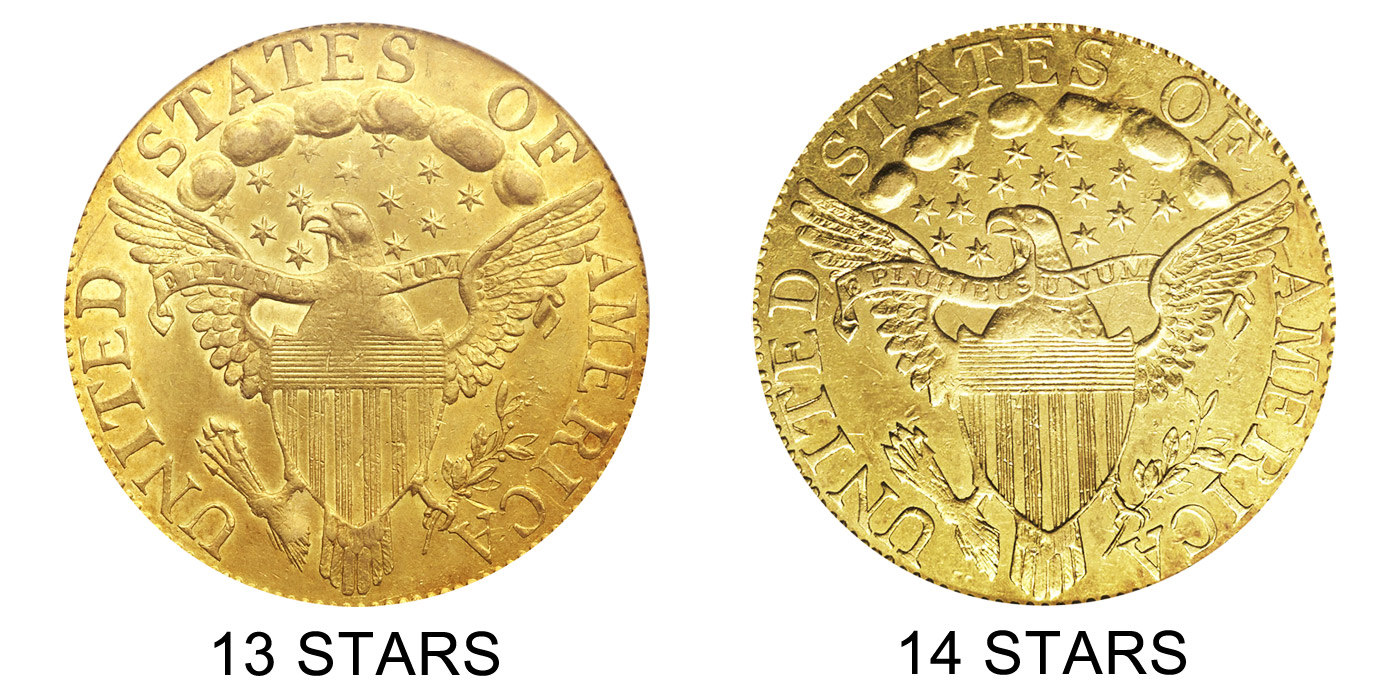 2. Vermont: In 1791 Vermont became the 14th state and a number of historic flags, including an early version of the stars and stripes have 14 stars. As well, a number of US coins from that year have 14 stars to signify Vermont joining the union. As well, there are various items of pottery and folk art, even Civil War tokens from the northeast regions of the country with 14 stars, believed to be associated with Vermont. 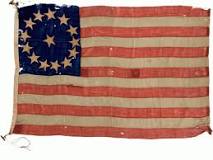 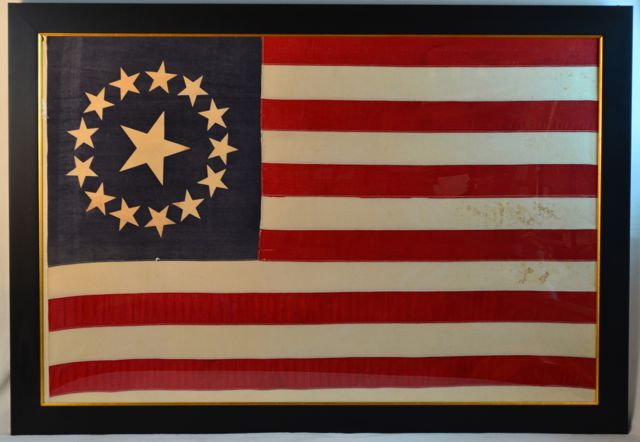 3. Successionists: 14 stars used to represent the 11 confederate states+Missouri+Kentucky+Territory of Arizona(?) By chance, by union, by succession... not sure if there are any leads here... but a real nice patriotic buckle with an unusual number of stars.

Last edited: Jul 30, 2020
*******
Being right isn't all it's cracked up to be.
The most important lessons in life are only learned in the realization you've been wrong.

It's really a nice buckle. Forward some pictures to American Digger magazine. Their staff is good at I.D's. I love the three B's. Buttons, bullets and buckles.
D

Thank you for the wealth of information - I did notice it had 14 stars but didn’t find much info. Do you get the sense that it may be old/original? As I mentioned I thought it was a reproduction just due to the fact it’s in such great shape. Again, appreciate all the help/info. Have a great night!

I passed this along to an old USAF buddy back in PA. He believes most likely a reproduction piece because magnetic. Of course without hands on it is simply an educated guess.........
Retired deputy sheriff. The wife said I needed a hobby and it could not be a girlfriend. So far the Fisher F5 is the perfect girlfriend, light on her feet and lets me lead across the dance floor!
D

Thanks Ronstar...appreciate you taking the time to do that

You will find a lot of people on here have a lot of knowledge about a lot of stuff. This is good for the forum and for those of us that dig up history
Retired deputy sheriff. The wife said I needed a hobby and it could not be a girlfriend. So far the Fisher F5 is the perfect girlfriend, light on her feet and lets me lead across the dance floor!

Dapman, tend to agree with Ronstar for a couple of reasons.

First, the light construction of the loop fastenings. Not that they don't exist, but could not find any military examples matching that style of the back with the crimped over flanges fastening the D-loops. This puts me in mind of the minimal design of the pressed metal products coming out of Japan during the 50's and 60's... designed and manufactured for minimal cost to produce. As well, attracted to a magnet.... looks like a bronze or brass copper alloy which are not generally magnetic, however, particularly in foreign production, iron dust was often added to the alloy which will make it somewhat magnet. Again to reduce the cost of production.

As well, the image of the eagle is very primitive, even amateurish, particularly with the wing and feather detail. So much so, it's hard to say what the eagle is perched on... Eagle on mountains? Partridge on a moustache?, ha... Below is the closest I could find to the design, a 2 piece militia waist plate, eagle facing dexter, wings extended pointing down, albeit with 13 stars and perched on a shield. There are similar designs to this with the eagle perched on clouds. 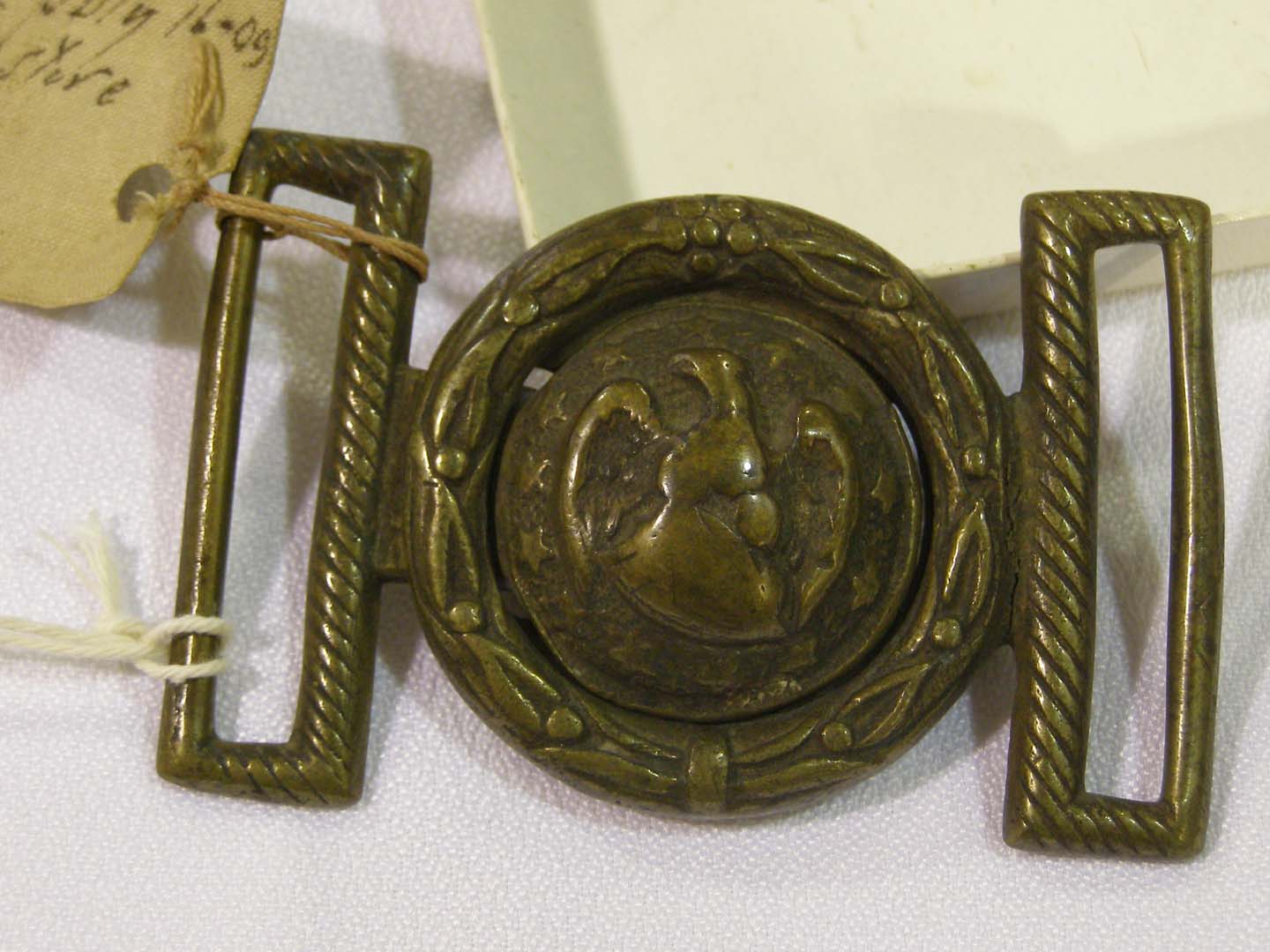 And we also have the 14 stars... on top of the crimped loop attachments, the magnetic properties, and the poor detail of the pressed eagle image, it's a fair guess that the dies for this plate may have been engraved by an artist who did not understand the significance of 13 stars,,, and maybe the shield on the example he was copying was half worn away and not knowing what it was supposed to be, just made something up as best he could? Again, possibly pointing to foreign manufacturing. Japan? India?

Best guess, but that said, please have it checked out by an expert. You'd hate to throw it back in the drawer and forget about it again if it happens to be a rare Green Mountain Boys militia belt plate from 1812, ha!

At the link below, a good selection of early US military belt plates with detailed descriptions. As you scroll through, notice the intricate detail in the eagles, even on the very early items.

www.gutenberg.org
Last edited: Aug 2, 2020
*******
Being right isn't all it's cracked up to be.
The most important lessons in life are only learned in the realization you've been wrong.