I got out for one last hunt before cramming the family in the dad-wagon and hitting the highway for the annual great American summer road trip. I am not taking my detector on vacation because I don’t want another divorce. Anyway, I met my digging partner early and we toon nearly 2 hours of back road byways to a picnic spot that has been a wealth of old coins for me. We both swing the Minelab CTX-3030. The digging was hot and so was the weather. We were digging coin-for-coin for a while. I’d pop up an Indian, and then he would. I’d dig a few Wheaties, then he would. I got a silver Roosie, and then he did. I dug ANOTHER Indian, and then less than two minutes later, he did! I thought when I pulled the 1857 Seated quarter that I set the bar too high for him to top. Well, not so much. He followed it up with an 1877 Seated dime.


At one point, I found an 1895-S Barber dime on the surface. Most coins were 1-2 inches deep. My partner, not to be outdone, pulled a second silver Roosie. I also dug a neat silver-plated badge from the 1906 elks Grand Lodge Reunion that was shaped like Balanced Rock at the Garden of the Gods, Colorado, because that’s where they held the reunion. I also got a neat tag, probably a luggage tag, that says “R. Thomas 35 Sedalis, MO.” I dug a total of 4 Indians – an 1880, 1897, 1898, and a crusty 188???. I also pulled a copper-nickel looking coin with no details that is just slightly smaller than a cent. It looks like the fatty Indians I have dug before with the dark red color. We dug a ton of trash and clad as well, and had a sweatin’ good time. It was a great way to abate the detecting itch while I am on vacation. 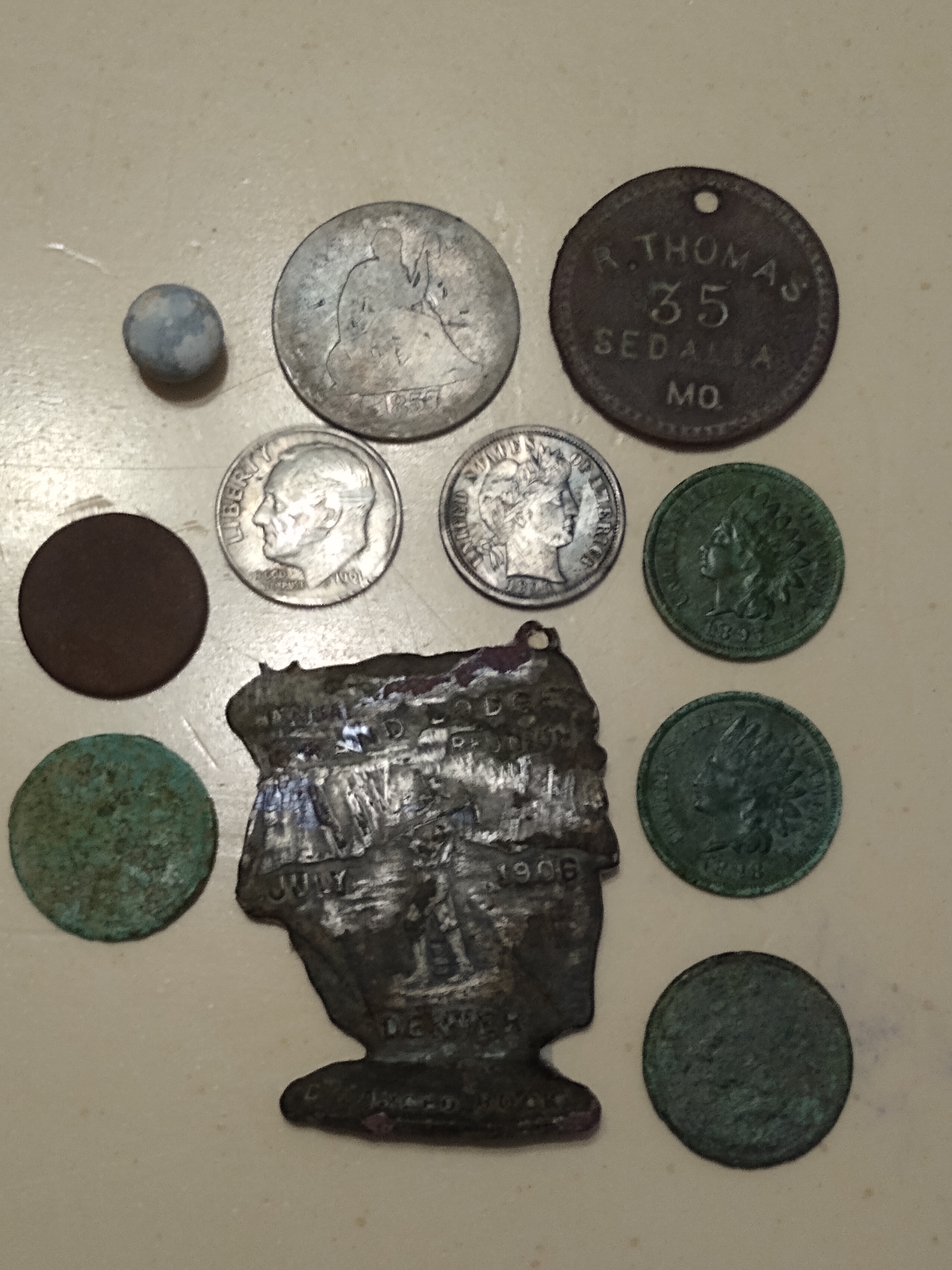 awesome hunt! when you and your hunting buddy are going back and forth... it's not a good day... it's a GREAT day! congrats and HH
E-trac, garrett PP's...oldest coin to date 1819 LC
D

Wow! Awesome day! Congratulations to you and your buddy!
I dig with and because of my DAD!
I

Uh....where exactly was that again?

What a day! You‘re on one of those sites like Rattlehead’s hill! Coins and tokens and relics an inch or two deep, just sitting there. It really plays into the theory that coins do NOT sink, they are covered by nature and a lot by humans, but regardless...a perfect ending to this stage of the summer! Now go have some fun with the family! Divorces can be expensive and nasty, so I hear....

What a great hunt !

1-2” deep?????? I need to move………
Retired deputy sheriff. The wife said I needed a hobby and it could not be a girlfriend. So far the Fisher F5 is the perfect girlfriend, light on her feet and lets me lead across the dance floor!

Thank you all for the kind words. I type this as I sit out watching the waves roll in on the Alabama coast. I can't help but wonder..... What treasures are out there in the sand??!!

This spot was dammed up to make a tank pond in about 1890. The towns folk obviously used it for picnic and recreation. At some parts, the coins are shallow while others are at around 6 inches. Strange, productive ground.
Bryan in Missouri
"MidMoTreasure" on Youtube
www.midmolawyer.com

I also like hunting with a hunting partner. It's far more fun to share the experience, and having someone that's finding the 'goodies' can really encourage you to up your game.
(Not to mention, you can watch each others backs if you're in an iffy area.)