Tom(CA) and I have been working a site that we researched and it's produced several 1850's - 1860's seated coins, and some rogue early 1900's coins, as well as a variety of period relics.

We tried to get one more trip in before Old Man Winter completely shut us down, and it did in fact shut us down, but not before I finally, got something I've been looking for for a long time, and after watching others find them over the years, I was starting to think it would never happen.

Well it finally happened, and it turned out to be a good one, an 1865 San Francisco minted Liberty Half Eagle!! Detected this with my Nokta Impact.

Here she is out of the hole: 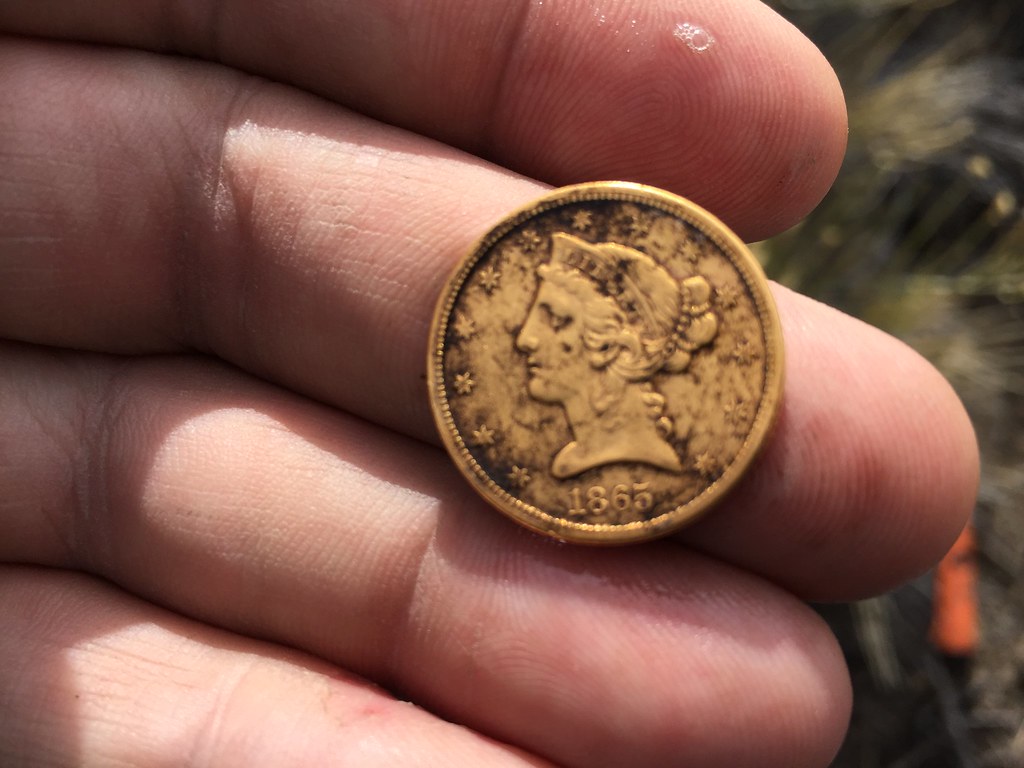 Here she is rinsed off: 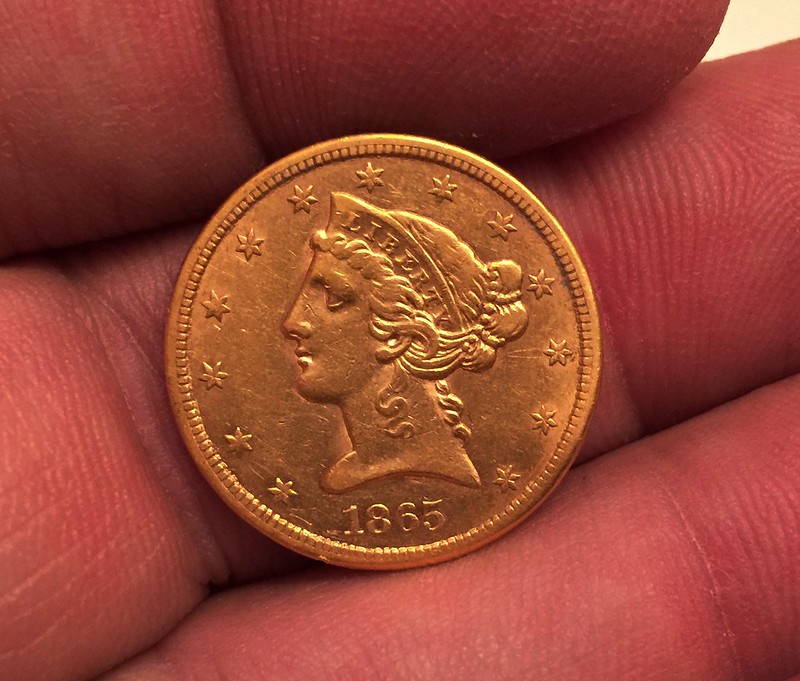 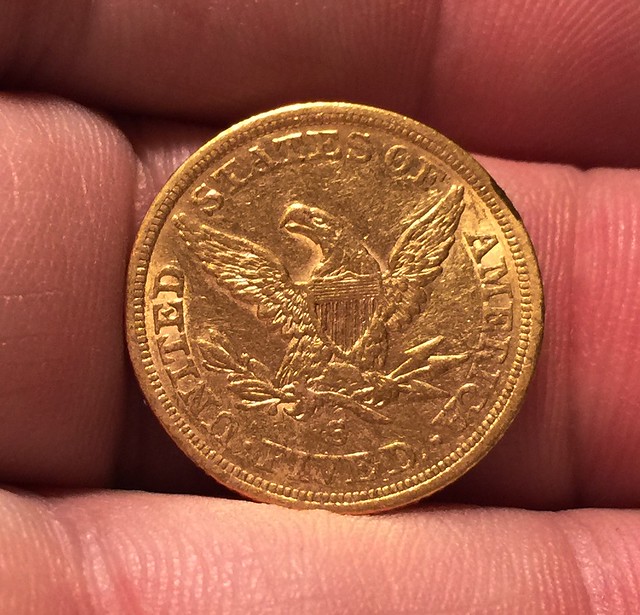 Here's a video of the hunt: https://youtu.be/SFyKr3MyOUk

Here's a bit of background on the coin from PCGS:

Although the mintage of the 1865-S is quite a bit higher than the mintages of the S Mint Half Eagles from 1858 to 1864, it compares in overall rarity to the 1858-S, 1860-S and 1863-S and is only slightly less rare than the others. Almost all known examples of this date are well worn with VF and lower being all one can expect to find. The 1865-S ranks second in the entire $5 series according to average grade and I do not know of a specimen that would grade better than EF. The very few specimens that I have seen were rather softly struck and the mintmark was always quite weak.

Thanks for looking, hopefully the next one comes easier
C

Finding a gold coin is probably on everyone's Bucket List, and they don't come easily [size=small](unless tour name is Tom and you live in California)[/size]. I stated detecting in March of '65 but didn't get to check a gold coin off my list until I got a $2½ in 1978. It took me 13 years to hit that mark. And now, 40 years later come next summer, I still haven't plucked another gold coin, with all the time spent in ghost towns and other early-day activity sites, I keep coming up dry when it comes to gold coins.

Good old times in California sure saw a lot of activity and much more exchange of gold coinage than many other states, and I envy the opportunities you have living down there with more potential. And now you've done it in a big way, too! Very nice find to help close out 2017. Way-to-Go!!

Naturally, some complements also go to Nokta for providing us such great detectors to get the job done.

God surely smiled upon you with this find. I haven't found my gold coin yet. Absolutely beautiful find. Well done in its recovery!

I think I would have fainted. That surely ends the year with a serious bang. Congrats.

Thanks everyone, it was truly a surreal moment when I saw that golden reeded edge

Now having seen Tom(CA) find three gold coins, any of them could've been located with a bounty hunter machine too (shallow, easy 4-way, five star signals), but he seems to be a gold coin magnet for sure. Of course hard work and location factor into the equation, but still all things being equal, he's one lucky S@B

DFMIKE - I was running the Impact @ 20kHz, Di3 mode is my prefered detecting mode, and it was a beautiful, pure sound, and no matter what direction I swung the coil the TID of 64 did not waver even one number. In hindsight the pure audio and unwavering TID was a big clue that I was about to dig something good, but at the same time, I cannot tell you how many times I've had a good sounding target around the same TID range that turned out to be a shotgun butt

is the impact screen red or is it my eyes?
worst day detecting is better than any day at work !

What a great find that you will remember this find and right to the spot the rest of your life.
A gold coin is the dream of many with only few that actually find one, I havent in my 45 years of detecting.

Rick
Sovereign GT since 1996
the Minelab Equinox 800 since March 2018
Timberwolfs HP for the Sovereign
Uni Probe For The other detectors
Got the detectors, just need time to use them all
C

is the impact screen red or is it my eyes?
Click to expand...

Thank you and yes the screen is red

Rick(ND) said:
What a great find that you will remember this find and right to the spot the rest of your life.
A gold coin is the dream of many with only few that actually find one, I havent in my 45 years of detecting.

Thanks Rick, as far a memorable, it ranks right up there with my first silver coin, first seated coin, first morgan dollar and first silver reale, you don't forget those finds. Fortunately I was able to capture this memory on video, so when I'm older and perhaps not as able to detect as I am now, I can relive the experience

I remember reading your Sovereign posts back in the day when I was using a Sovereign XS2a-Pro. Didn't you do a write-up on it using the WOT coil to clean out a particular park site?

Cal_Cobra said:
I remember reading your Sovereign posts back in the day when I was using a Sovereign XS2a-Pro. Didn't you do a write-up on it using the WOT coil to clean out a particular park site?
Click to expand...

Not a Minelab fan, even after owning several Sovereigns, Explorers and X-Terras, but you just mentioned my favorite Minelab model, the Sovereign XS2a-Pro I had with a modified '180' display. Used it mainly with the smaller coil, and for some applications it was a fun detector to have .... back then. The weight and balance got a little fatiguing, for me and my health issues, but it had its place and was a good 'fit' in my current detector line-up back then.

It wouldn't make-the-grade for me today, nor match the in-the-field performance I get from my Impact, Relic, CoRe or MX-7. It was nice to see that model mentioned in this advanced-detector era, however. Glad to know you once enjoyed the XS 2a-Pro as well.

The Sovereign that did so well for me was the XS with the 180 meter and the 8 inch coinsearch coil. I did a field test for Sun Ray on 3 different concentric coils for park hunting that worked great, at least the 8 inch and 12 inch that blew away a Explorer at a yard and did the test on the 12 inch Intruder coil that was impressive.
Many find it hard to believe but I did well with the XS and the coinsearch at 2 different well worked park since 1973 and was able to pick out very few new coin and quite a few deep old coins. The one that really impressed me was a Franklin half that had a big rusty bolt on top of it..
I am working this past year with the Impact and trying to learn it the little time I had and had just got the concentric coil when our winter came, so I got to wait to see what I can really do with it. I feel the Impact will be a keeper like my Sovereign GT.

Rick
Sovereign GT since 1996
the Minelab Equinox 800 since March 2018
Timberwolfs HP for the Sovereign
Uni Probe For The other detectors
Got the detectors, just need time to use them all
C

Wow--great job, Cal. Impact really has a nose for the gold.
cjc
C

That Sunray Intruder was a great beach coil for me!

CJC the Impact definitely likes low conductors in 20kHz mode, dug a super deep V nickel, a nice Victorian gold ring in the midst of a sea of iron, and now this coin. My Makro and Nokta machines have easily paid for themselves several times over in the past couple of years of use

Wow. That's awesome.
May have to take a trip to the west side of the country for sites capable of holding that type of find!!!
Michigan isn't too bountiful as of late.
One day I'll find one
That is probably one of the best finds I've ever seen in my couple years detecting.
What a great end to 2017 for you.
I'll be out there come spring.
Stefan (Michigan)

*Not listed in any special order*