Came across these yesterday......

Some of my grandma's old snuff cans 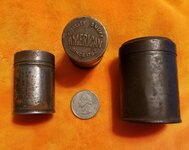 My grandma actually dipped snuff. There is some old snuff in one can. Yeah, I know.......I am a hillbilly!!

Join the hillbilly club. I had great aunts that dipped on a regular basis. I remember the brown jars with the dots on the bottom as well as small snuff cans. Those are cool. I also remember the spit cans they used, sorta ugh. lol
I've been detecting since Jan. 2001. I use a Nokta/Makro Simplex + & a BH Tracker IV. My best find was a Civil War Cavalry button made by T. Miller in Houston, Tx. My oldest relic is a lockplate from a flintlock rifle. My oldest coin is a 1837 Capped Bust Dime.

I think it was Garret snuff that came in small glass w/metal lid. You would clean the glasses and use them.
When we went to grandpa and grandma's that's what we drank out of when I was a kid. My grandpa had a coal
bucket full of ashes out of potbellied stove by his chair for a spittoon

Pretty cool , about 32 years ago ,, I was living in the old family farm house , that had been passed down for generations. My Dad was willed the house ,, we were working on it ,, the house had no insulation in it ,, so I was in the attic and we were blowing in insulation. As I was backing out with the insulation blower hose ,, I would find a few things. At 1 point I was able to look down into a wall,, I saw something in the wall,,reached in and pulled out a Tobacco Sale calender from 1937,,, it was basically a calender of the days that the tobacco buyers would be at the buyers warehouse,, and the farmers would carry their crops to market on them days .. Well,, backing out of the attic access door ,, I found a bunch of those little tin cans. My Dad was there as I handed the out. He said they were my Great Grandmothers snuff cans. Said she always did snuff , but had to hide it from my Great Grandfather ,,, which is why it was hidden just inside the attic access door. I had never met my Great Grandmother,, or Great grandfather for that matter . But ,, it was just a little bit of family history.
So I guess ,, I'm from the hillbilly clans as well.

Well good or bad, family history usually is interesting!
Have ye ever listened to some folks for a minute and thought......."Their cornbread ain't done in the middle"~~Briscoe Darling

okierebel said:
My grandma actually dipped snuff. There is some old snuff in one can. Yeah, I know.......I am a hillbilly!!

My Granny dipped Red Top Snuff. I have a photo of her sitting in her rocking chair with her snuff can sitting in the floor next to her chair. I reckon that qualifys me as a hillbilly too.

If your wish is to Live the Life of which you'd most like to be accustomed to, the same as Ma & Pa Kettle, You Might be a Hillbilly. Lol