Out on the Curb Strips Again

Nothing fancy ... can't complain. It was a good day, fresh air and sunshine, swinging the coil.

All finds on a couple of curb strips, with the Garrett GTI-2500. 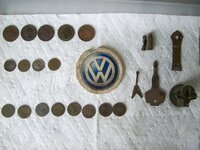 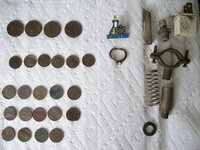 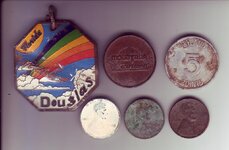 The VW emblem was a surface find (I could stick it on my Ford).

Question: Why would anyone paint a Lincoln cent with white paint?

Yeah, a few knee bends there and some monetary rewards along with the fresh air. I've found 3-4 painted white cents over the years and just recently one painted red. I have the same question you have, Joe? HH Jim tn

Gamma_Joe said:
Nothing fancy ... can't complain. It was a good day, fresh air and sunshine, swinging the coil.

All finds on a couple of curb strips, with the Garrett GTI-2500.

The VW emblem was a surface find (I could stick it on my Ford).

Question: Why would anyone paint a Lincoln cent with white paint?

Used as coin finds for games in certain planted hunts! Certain colors won certain prizes or most of a certain color won a nicer prize! Ma

Good you are getting out. I wonder what that piece that is shaped like a little guitar is all about? Back in the late 70s, early 80's I may have painted a penny or two. Back in the day I used to put together those plastic model car kits. I had little jars of Testors paint and sometime the car wasnt the only thing that got painted.

Ah the old GTI my first detector found my first barber dime spill with one nice finds .
Mark
Psalms 24:1 The earth is the LORD'S, and all it contains...But God shares with us who search

One of the quarters I got in that apartment complex appeared to be painted white, wonder if there was a hunt there at some time? The wheats and silvers were not that deep..... interesting. Glad you got out, doing the same here !
Retired deputy sheriff. The wife said I needed a hobby and it could not be a girlfriend. So far the Fisher F5 is the perfect girlfriend, light on her feet and lets me lead across the dance floor!
G

In air testing it detects a dime at 10 inches. (I know "air testing" isn't the same as "in the ground".)

In the ground here in Jacksonville, Florida it has pulled up dimes at 7 inches. Most of the coins are 3 to 5 inches in the older neighborhoods here, going back to the early 1900s. We don't get any "freeze and thaw" during the year, so the soil doesn't shift much over the seasons.

It's every bit as good as my other detector, a Teknetics Omega 8000 version 4, and my earlier unit, a Fisher CZ-7a.

I'd say that of all the ones I've used, the GTI-2500 still ranks at the top for hunting coins. That's because of its "target sizing" indication during pinpointing. Looking for coins, you can avoid a lot of "deep trash" (unless you want to dig it).

Yes ... Thanks for the call! I didn't know what it was, until you called it. Here's a closer view. 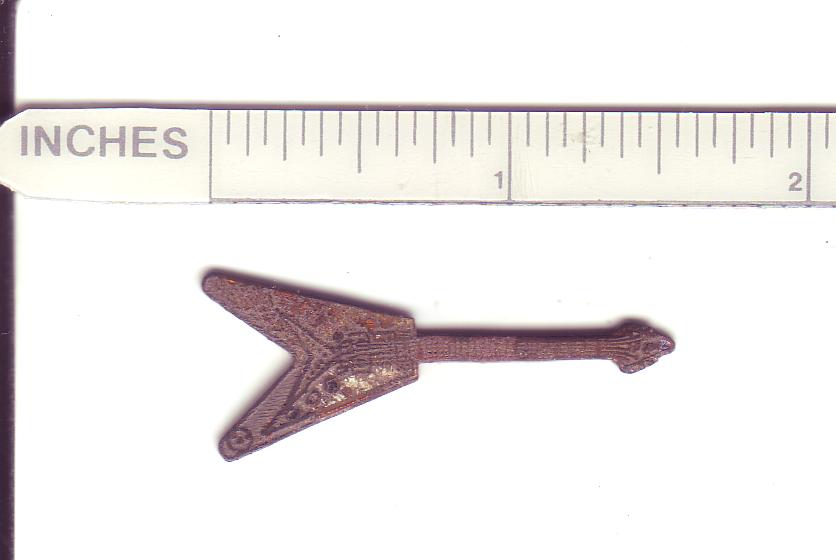 Most welcome, glad we solved that id. Pretty slim pickings here at Vilano Beach, but can slaw depth at low tide cost me a busted wood shaft.

Looks like an old broom handle will fix that ... Maybe better to use a piece of plastic PVC pipe, or even some aluminum pipe. Best of luck with it.