Sat Down, Then Took a Walk And Went To The Barber

Finds are from the last 2 weekends at a list of researched old public city parks, schools and fairgrounds I compiled that I thought may still have some deep targets. Everything was found with my minelab eTrac.
I pulled the sharp 1885 seated dime in a Minnesota city park on Sunday. It was every bit of an 11+ inch coin. The 1917 Mercury dime with the black stain (Was laying on a piece of Iron) as also a super deep one pushing 11 inches.
I was also running into the big silver last weekend as I got a first year (1964 Kennedy - 90% silver) Half as well as the Walker, Barber and Washington Quarter.
I have gotten a handful of 40% silver Kennedy halves (1965-70) but that was the first time I hit a 1964. They are hard to find.
I was also happy to pull that "G Man" toy badge (Made by Tootsie; Circa 1948-1950).
The rain stayed away last weekend so it was a great weekend to hunt other than being hot.
Thanks for looking!
Dave

Other Finds
6 rings (2 are silver. The nice one is a "Mother of Pearl" Sterling stamped ring)
Tootsie Toy Badge
1930s "Acme Thunderer" Coaches/Referee Whistle. It still works great once I cleaned it
Tennis Racket Pin. This must have some age to it.
The top of Wax Seal Stamper??. Not sure if that has a cross in the middle or it is part of the design.
Few Old Buttons including a WWII era Starburst Button
Makeup Compact
1960 Brazilian Bus Token (Upper right hand corner of nickels picture)
Brass LeisureCor Gaming Token (Probably 1970s)
Old Bell or hub cap
Personalized Bracelet
Small Roundball / Pistol Ball
Small PIn
Crude Cast Fishing Sinker 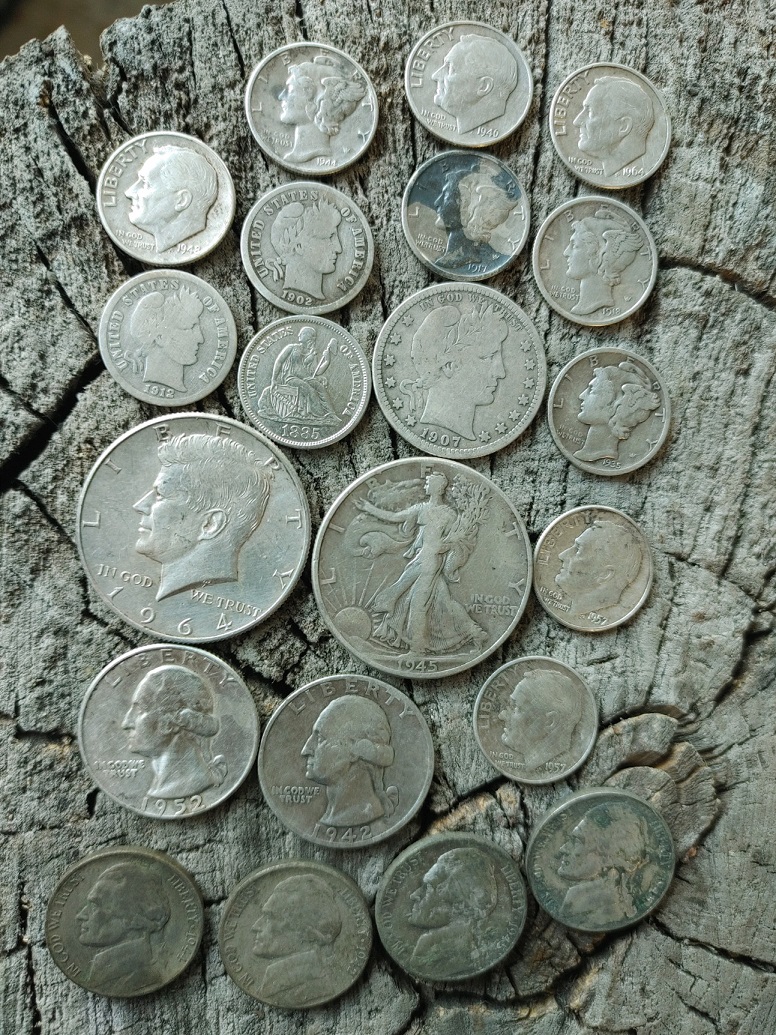 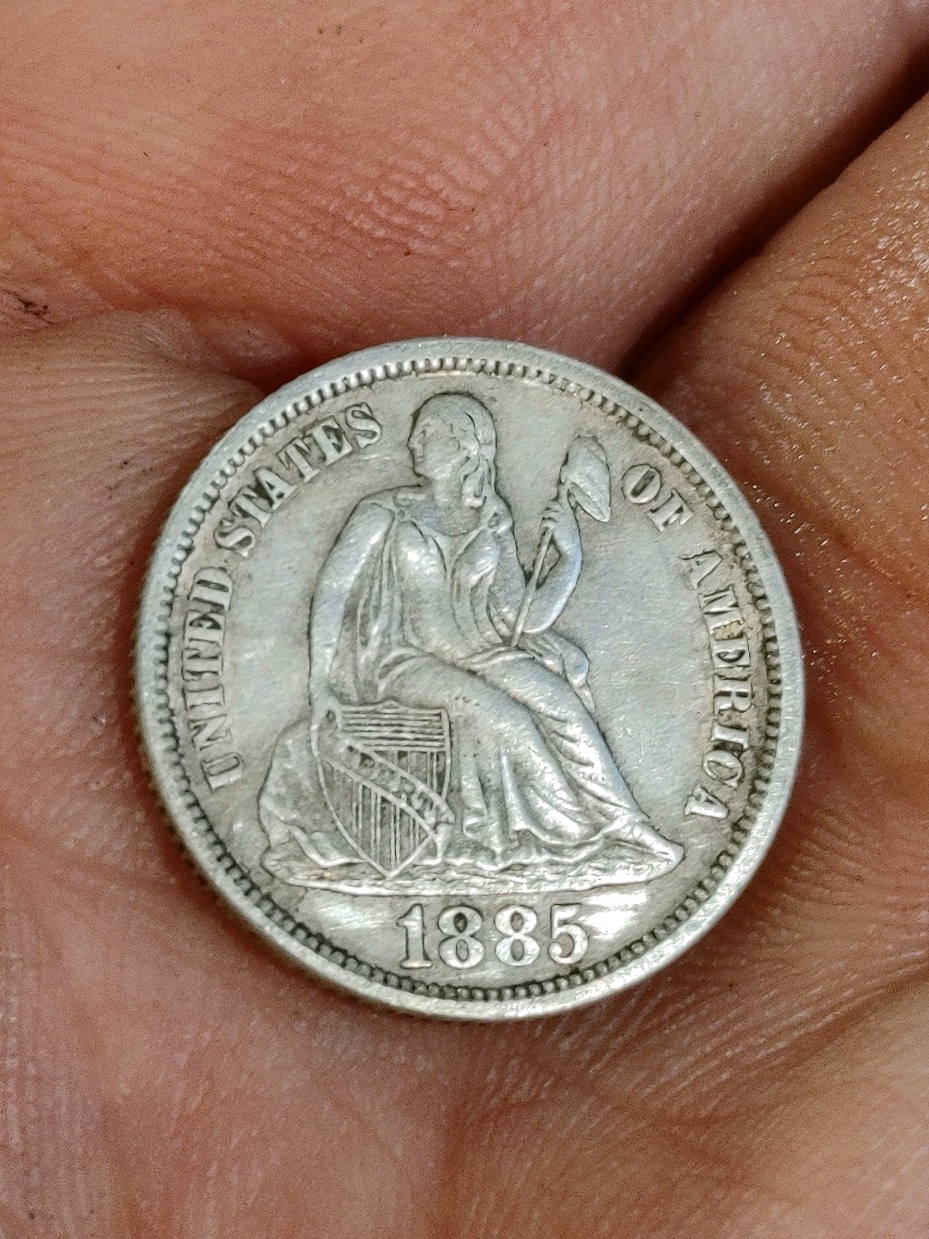 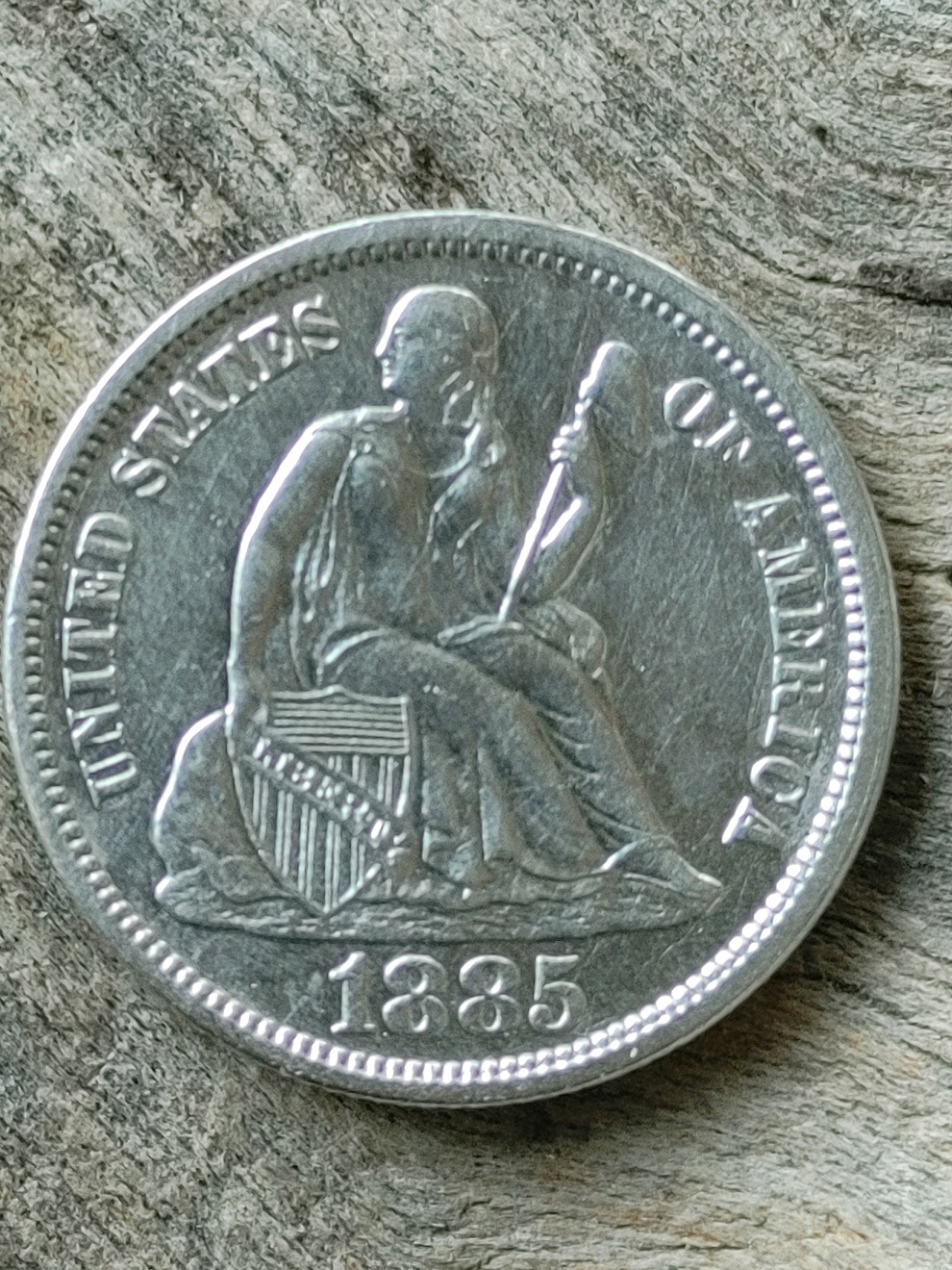 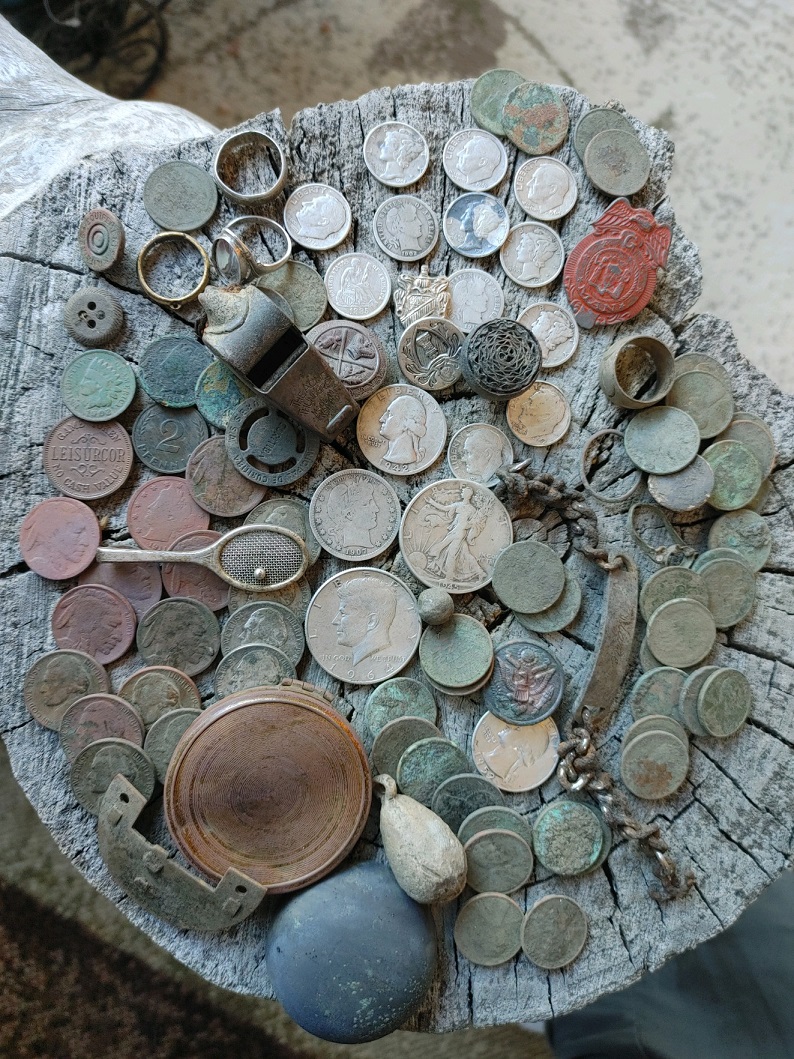 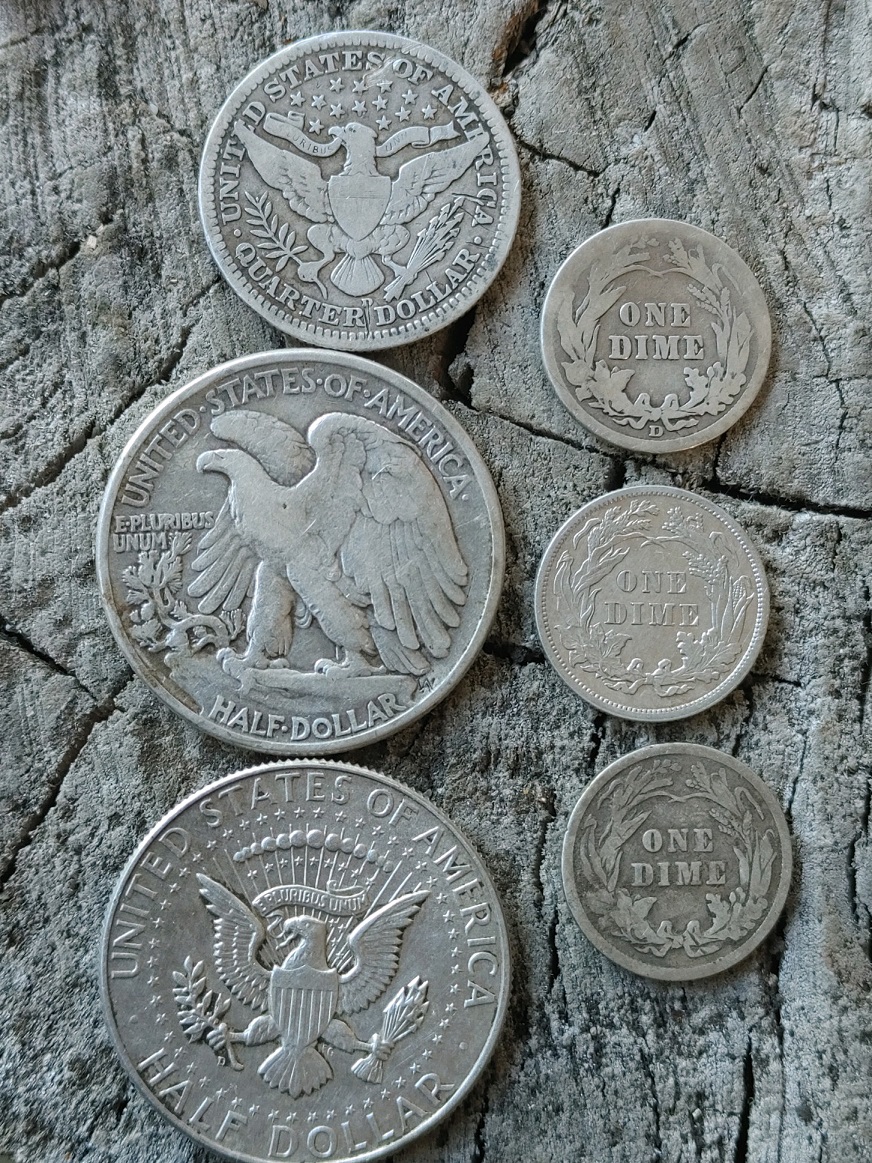 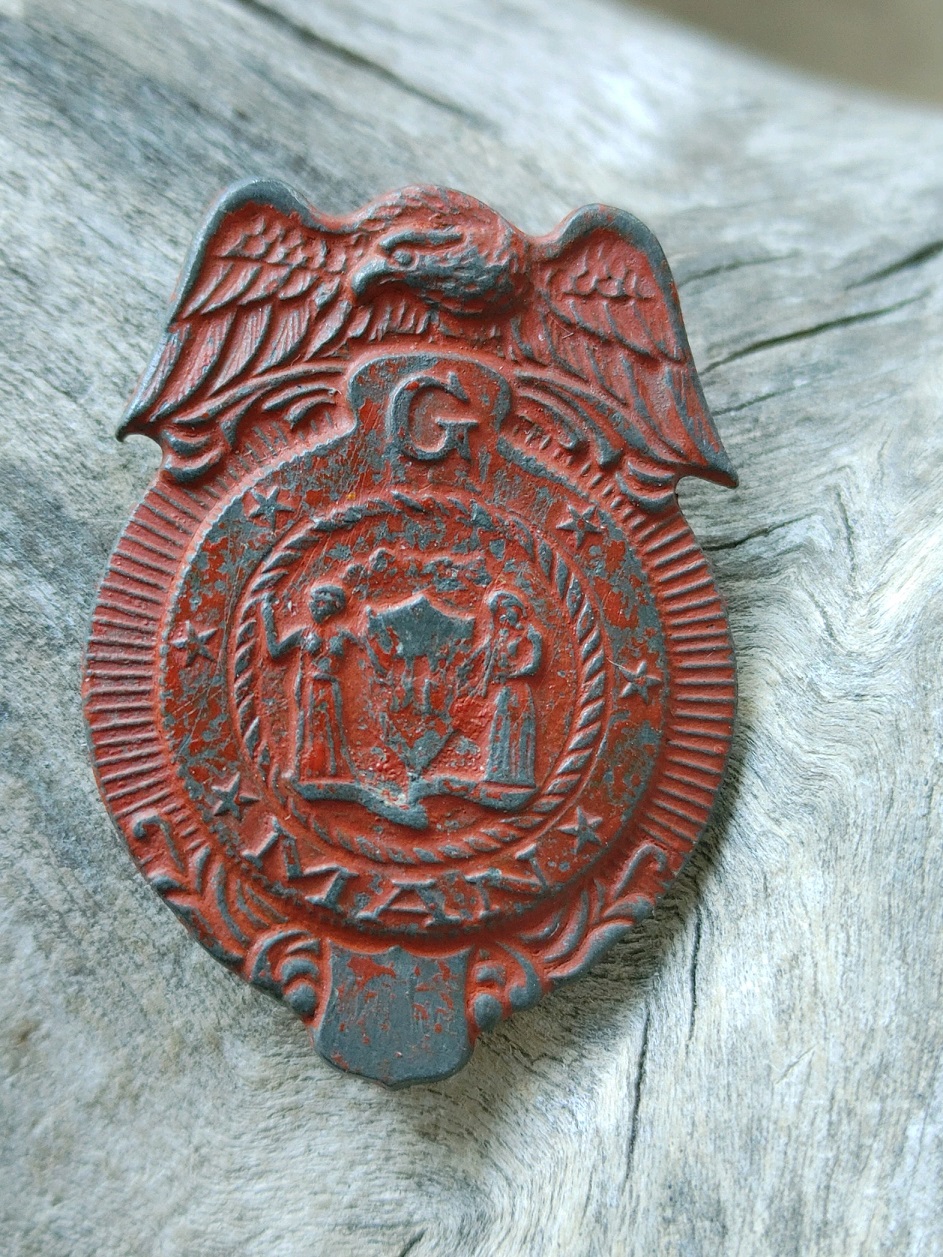 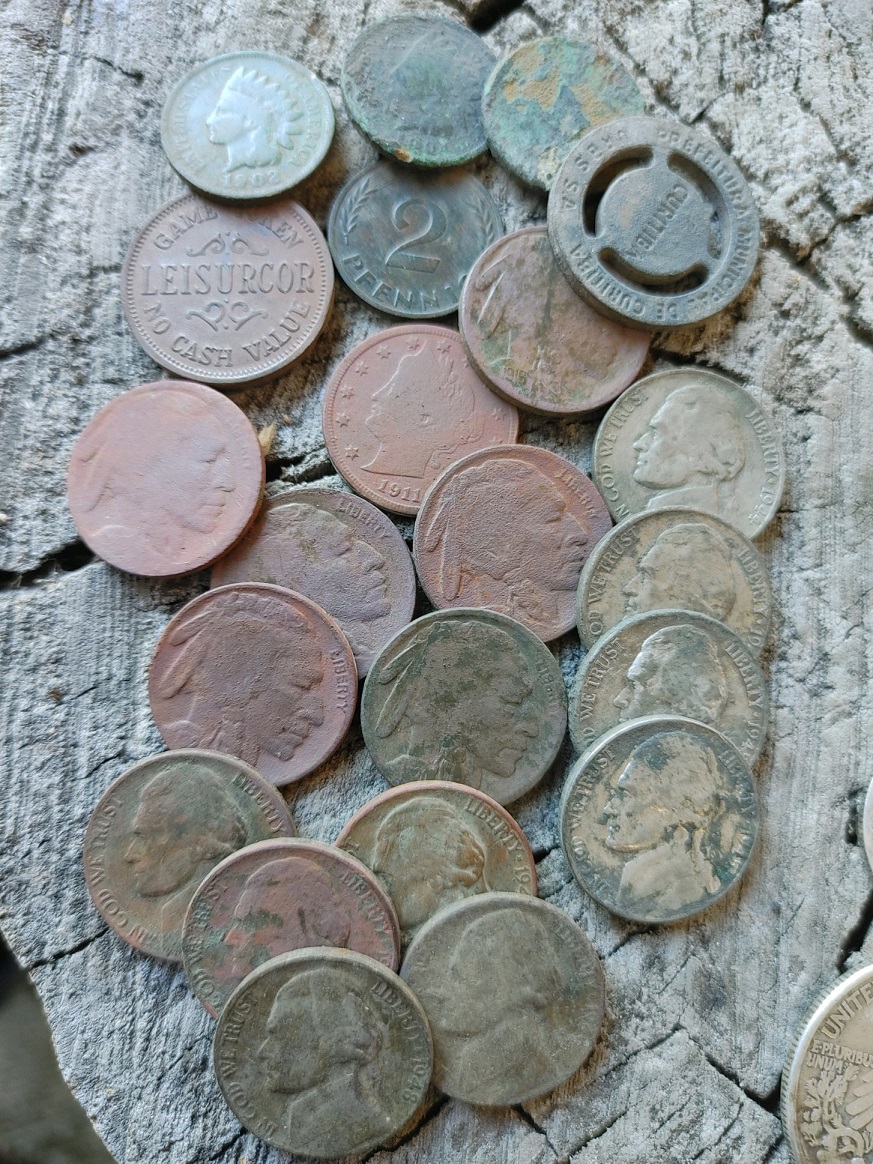 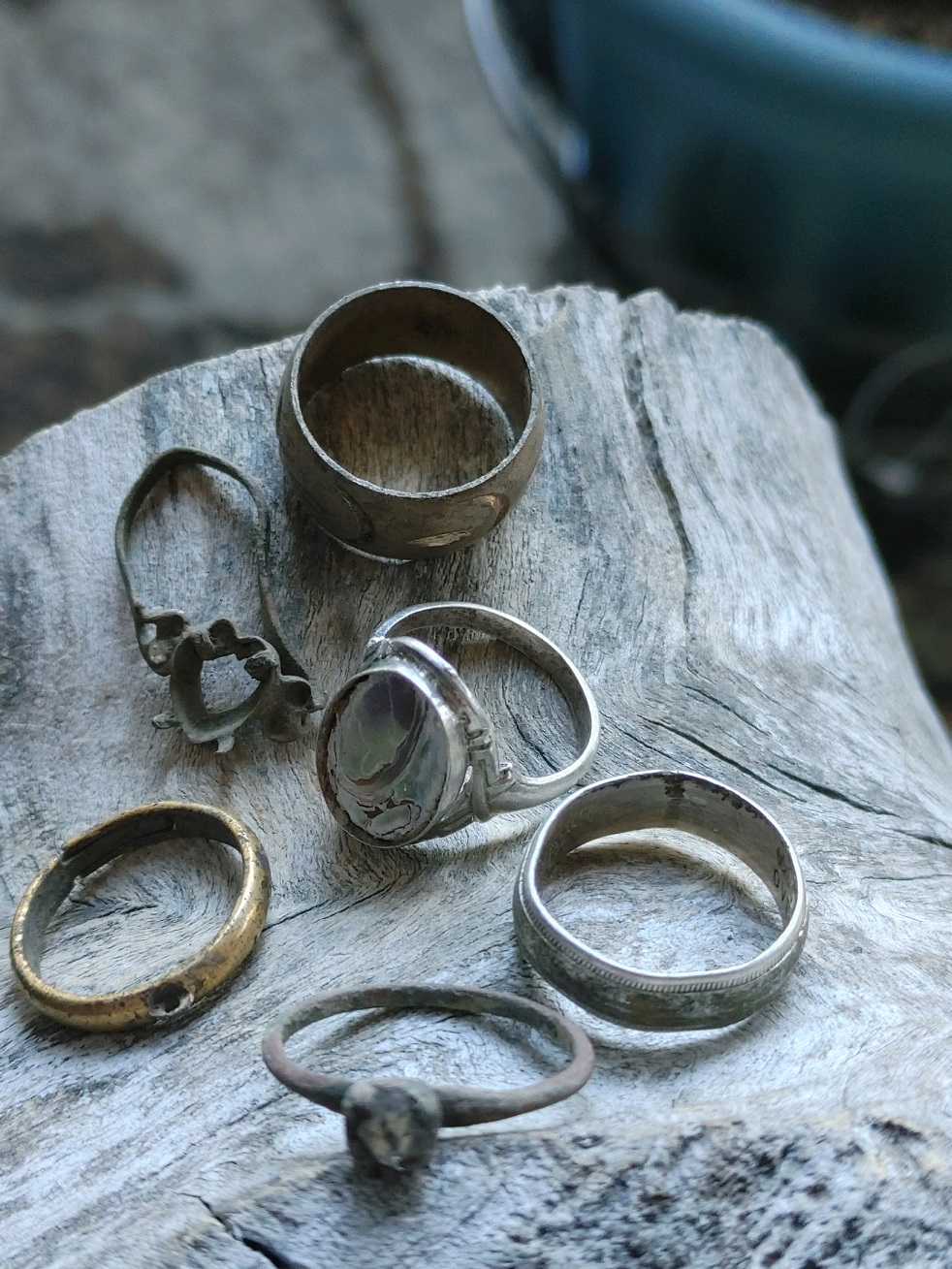 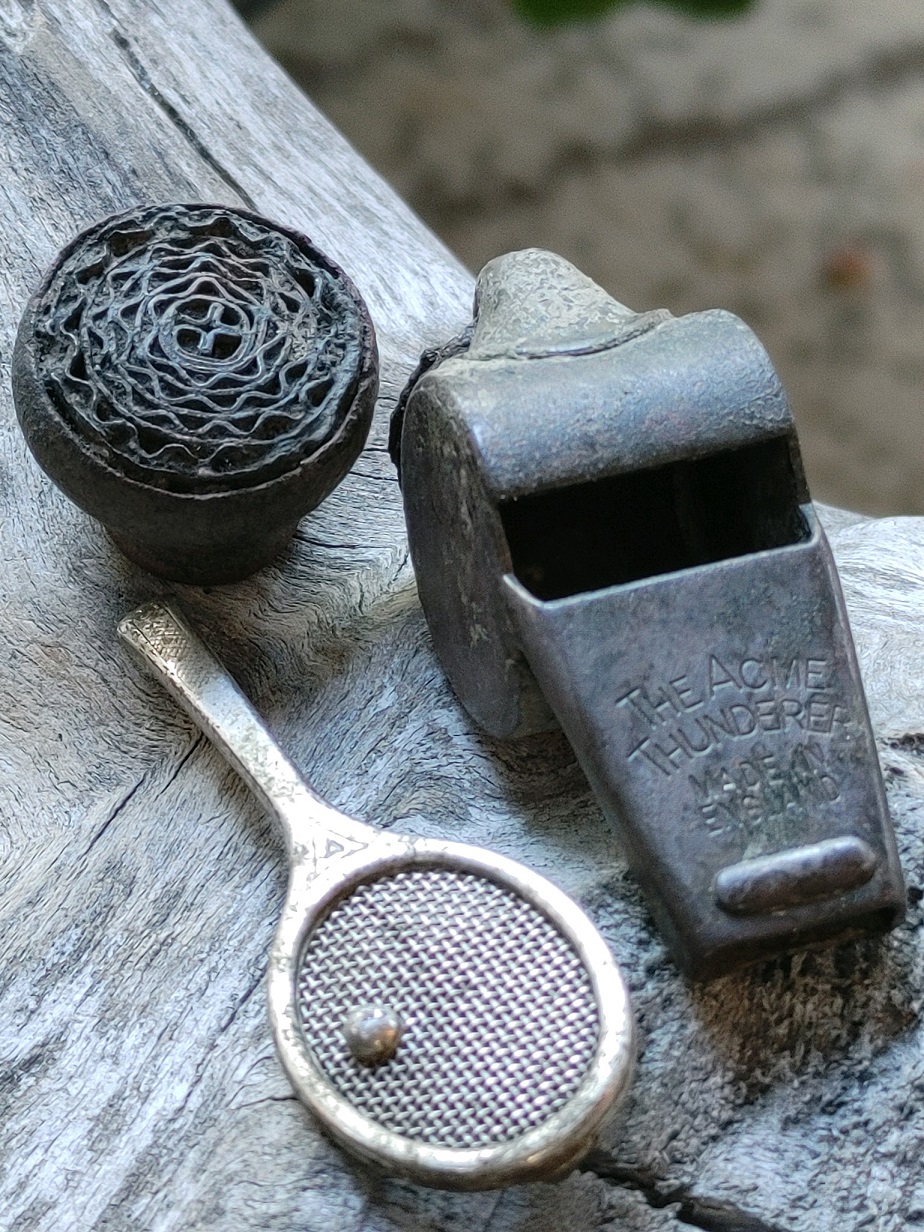 . Thats just humbling to see all that.
Retired deputy sheriff. The wife said I needed a hobby and it could not be a girlfriend. So far the Fisher F5 is the perfect girlfriend, light on her feet and lets me lead across the dance floor!
E

Wow....The ladies you found are gorgeous....and it is good to see the IH's back in your posts...Your going to need a bigger tree stump to hold all your finds !
Thank you for sharing just your weekend finds with us and it is good to see you got seated... a hair cut and took a walk ....what could be better ?
Detectors Etrac

Nice scores Dave those silver Kennedy’s are tough to find I hit one last fall they’re rare for sure and that’s a beautiful seated!
Nice finds ..
Mark
Psalms 24:1 The earth is the LORD'S, and all it contains...But God shares with us who search
T

Incredible finds…. Photos like this motivates all of us to get out to detect!!!

You and the Etrac cleaned up. Great saves. Continued Success to the two of you.
J

Goodness gracious, simply outstanding hunting. You deserve every silver coin and other goodies you get. HH Jim Tn
E

Yes...a " MONSTER "post for sure !
The 1917 dime lying on a piece of iron at 11 inches shows how well you know your detector and accessories for it. Totally amazing find !
Detectors Etrac
C

Quite the finds. I'm up in MN, not sure how long, perhaps we can get together. Are you detecting with James quite a bit? Looks like the ground is super dry, how you dealing with that?

It's official Floodplaindetector is a Master Detectorist,

Staff member
Whew that’s a heck of a haul of goodies. Congratulations on some nice finds.

Want to learn a little about the Minelab Explorer line click below.
https://www.findmall.com/threads/th...including-useful-tips-and-information.274262/
E

u2robert said:
It's official Floodplaindetector is a Master Detectorist,
Click to expand...

Yes he is one of the best out there for sure.
Detectors Etrac

It was hardly worth going out for those finds, wasn't it?
I was born intelligent, education ruined me!
J

One of the best hauls I've seen you post Dave! That seated is spectacular. The non-coin finds are really interesting as well. You should run an Etrac Boot Camp, I'd pay to learn from you!
Minelab Detectors Used:
Equinox 800
E-TRAC
X-Terra 70
W

A great time for you and a great time for us just looking at great finds. So proud that they are now out of the ground and in your collection. The older coins, to me, have a look of artistry and patriotism. Now----zinc??
J

Damn! Save some for the rest of us!